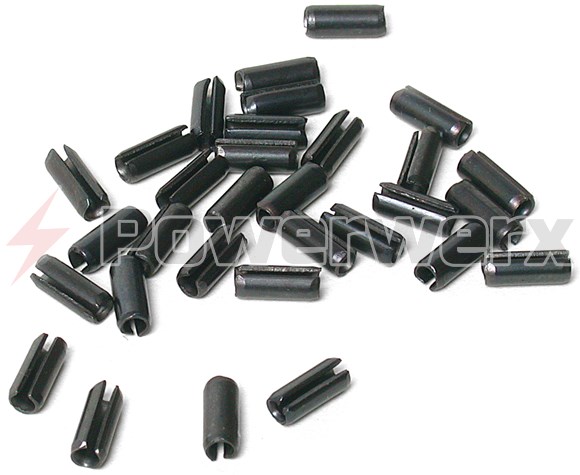 Roll Pins for 15, 30 & 45 Amp Powerpole Housings - 25 pins
Customer Reviews
Easy as Pie! By RODNEY
Assemble a few AR15's and you'll have no problem with these roll pins...read the reviews but ordered them anyway and found they were just too easy to install! I don't understand why anyone would have problems with these. They press in easily and retain the two connectors perfectly. 5 Stars!
Was this review helpful? Yes No (0/0)
Worked fine for me By Guest
Used these today for some of the under the dash connections during a trailer brake controller install. They are not easy to press in but I guess if they were then they may fall out. For me they worked as I expected them to.
Was this review helpful? Yes No (0/0)
Better than superglue By Guest
My experience is 180 degrees opposite the other reviewers.  They are neat, secure, and allow for disassembly.  Very useful if you are interacting with Hams using the old pre-ARES standard where red is on the left. I made an insertion/removal tool by inserting a sewing machine needle into a half-inch dowel and then cutting all but 1/4" off the sharp end.  Makes assembly super easy.
Was this review helpful? Yes No (7/1)
They are too rigid By Guest
Same as the other reviewers, these are not usable as they won't compress.  They are too rigid.
Was this review helpful? Yes No (11/1)
Not such a good idea By Udo
I agree with the other reviewer about this pin creating more problems than being a solution. I also use the cable tie method but use it to tie the two mating housings together. This will prevent from the connection coming apart and from sliding.
Was this review helpful? Yes No (18/2)
more cons than pros By Karl
These sound like a great idea until you try them out.  The roll pins are so rigid and the plastic housings are so (relatively) flexible that instead of the roll pin compressing, the two housings spread apart slightly to accommodate the pin.  This makes the pinned connector pair a little harder to connect to a pair that is not pinned due to the slight spacing mismatch.

They also don't feel like they'll stay in place super reliably.  If one comes loose, you've got a nice little conductive piece of metal bouncing around near your electrical equipment.  That's a recipe for a really bad day if the pin finds it's way into anything with a circuit board.

Other than trying one or two out initially, they're all sitting in the bottom of a box somewhere.  I've never had problems with connectors coming apart anyways.  Running a small zip tie through the hole intended for the roll pin and zipping it shut around the back (wire) side of the housings works just as well with none of the side effects, and is easily reversible if a connector needs to be reconfigured.  A drop of super glue in the dovetail joint as the two are slid together should work even better, but would be permanent.
Was this review helpful? Yes No (58/2)
Product review was submitted successfully, thanks!
Write a review of this product and share your opinion with others.
-Next Step