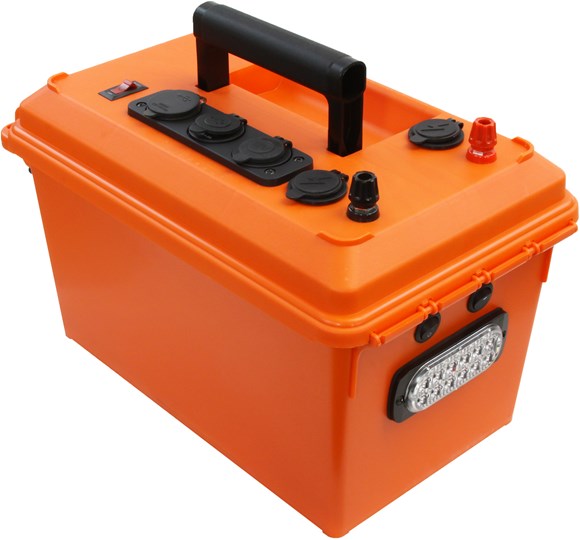 Powerwerx MEGAbox Portable Power Box for 30-70Ah Bioenno Batteries
Customer Reviews
Great box - Charger plug already on the box By Guest
The box is great, but wish it had a better light.  The 17 modes is a bit much.  A light that had a bright/dim White/Green/Red mode would be much more useful than a disco light.  Many others have said a lot of good things about the box so I won't repeat, but to charge, just plug your charger/solar charger into the power pole on the top of the box and you're done.  No need to reinvent the wheel with a special charger plugin that you add directly to the battery.
Was this review helpful? Yes No (4/0)
Very happy to have this with me in the field By Guest
I'd been looking at this box for a while and finally decided to get one. I tried it in the field today and I'm very happy with it; it's just what I needed. Instead of having to remember the various adaptors and the battery, I just grab this. I like that I don't need to worry as much about the battery getting knocked around in the back of the van when it's protected by the box.
Was this review helpful? Yes No (3/0)
Works well. Could use some more connections and displays By Mark
I agree with the previous reviewers, with the exception of the complaints that the box needs to be opened to charge.  It doesn’t.  It can be charged simply by connecting the charger power pole connectors to the power pole connectors on the top of the box.  The instructions even mention this and I verified that it can be done.  It’s also possible to charge in a pass thru fashion while powering other gear, although I assume there is probably a current limit so as to not overload the charger.

Overall a useful product.  Only wish that it had a better charge indicator than just voltage level.

Also wish it had a bigger model - big enough for say a 100Ah Battle Born battery.

And my last wish is for a different color.  Nothing says steal me more than something that looks like a toolbox.
Was this review helpful? Yes No (14/1)
Pretty Good, But Some Changes Were Needed. By Larry
I decided to use a Bioenno 30Ah battery to replace a 20 Amp AC power supply for the ham radios in my station – and also have a battery I could take into the field.  I’ve built setups for 9Ah and 15Ah Bioennos inside Pelican 1300 cases using 3D printing and various sockets and parts.  However, I decided that the MEGAbox was pretty much “there”.  It saved me some work, sits on my bench for normal operations, and works well as a portable power supply.  However, there are few things that require “intervention”.

1.  The Disco Light.  Really?  The last thing I needed was a light source that required me going through 17 (I think) button presses to get to the very few useful white light modes, and ending up with none of the colored light modes being useful at all.  So most of that “feature” went into the trash.

I looked at several options from a major online LED company and finally settled on “Round LED Truck and Trailer Light with Grommet - 3/4" Clearance Marker Light” – one red and two white at $3.95 each, as well as two more round rocker switches.  I added an extra switch hole, and then enlarged the three holes for the Disco Light to take the new LEDs.  Each light as a switch above it.

Now I have two levels of white light, and a red light that isn’t overwhelming.  There might be more elegant ways of doing this (hint) but I didn’t want to turn the end of the MEGAbox into Swiss cheese – or cut a big hole and then fabricate a mounting plate.

2.  Charging.  As I understand it, not really a problem because you can just charge through the PowerPole connections on the top.  I’m probably going to mount a 3D-printed single connection above the “power” switch (or another commercial double outlet) connected to the “charging” connector inside.

3.  Switch.  So I guess this is just to turn off the parasitic loads and reduce the likelihood of something getting into the automotive socket.  I can understand why some folks might like a master switch.

4.  Battery Velcro.  I guess -- but not an inspired choice for securing the battery.  That probably means 3D-printing some kind of bracket to better secure the battery – somehow secure that to the case.

This might have been a 4-star review because the MEGAbox is better than average, but the amount of rework required drops the rating down to 3 stars.
Was this review helpful? Yes No (24/2)
Added the one thing I thought was missing By Guest
Like others who have commented, I felt like it was missing an external charge port, so I added one.  In fact I added two using the dual PowerPole socket from PowerWerks AND an “Epic PwrGate”.  Now I can bring in external “shore power” and/or solar power to charge and power the unit.  I do wish it had a “master switch” that disabled ALL the ports, not just the lighter socket and USB ones, but that may be easy to resolve also.  None the less, it’s a great device that got me way farther down the road toward a one-piece portable power solution.
Was this review helpful? Yes No (20/4)
Very nice. Wish there were light colors to choose for night vision By Jeffrey
Really nice box! I ended up picking up an Off-on-Off Toggle Switch and a red and white selectable light to replace the white/amber one included so that I can have only red on when doing astrophotography.  Wish there had been a dual color or a red single color option available for purchase so I didn’t have to mod it. It’s perfect now though!
Was this review helpful? Yes No (28/3)
Nice Box -- One Suggestion By Guest
I just received the MEGAbox Portable Power Box.  It is a nice system and works well.  I wish they had included a charging port, and a way to charge the battery with the Powerwerx solar system while the unit is in operation.  Unless I've missed something obvious, you have to open up the box to charge the battery.  This could compromise the system in some field conditions. All that said, Powerwerx is a great outfit.  It is always good to do business with them.
Was this review helpful? Yes No (24/10)
Awesome By Guest
I bought this for astronomy after a review on Cloudynights. Great way to power your setup all night long. Shipping was significantly faster than advertised.
Was this review helpful? Yes No (15/2)
Fantastic power box...even better customer service! By Bob
I dont usually submit online reviews, so when I do, a product or service has really tripped my trigger so to speak.  I ordered this MEGAbox along with the Bioenno 40A battery, 10amp charger and Power Meter to run my astronomy gear in the field.  The build quality of this box is top notch using well thought out components.  For example, all of the charge ports have dust covers on them, with particular attention to the covers over the built in Anderson Power Pole ports. These covers are rubber with molded in nibs that insert into the Power Pole to keep dust and moisture off the contacts. Nice!  Another small feature is the cover over the volt meter/USB C port is a smoky grey translucent plastic so you can read the digital battery voltage thru the cover without having to flip it up.  While true, as pointed out by another reviewer, for astronomy use, dim red lights are desirable, but this box meets many needs with many uses.

Customer service these days seems to be a thing of the past, especially with dot coms.  The documentation shipped with the Bioenno battery said to use a 6A charger max. I ordered the 10A.  A call to Bioenno and I got their voice mail, so I called Powerwerx and Dave answered. He assured me that the 10A charger was fine and was disappointed that I had to leave a voice mail at Bioenno.  Hh called Bioenno to verify the charger and promptly called me back confirming it was ok.  Then Bioenno called soon after and also confirmed.  I was blown away with the extent of customer service I received from both companies.

I'll definitely be back to Powerwerx as well as Bioenno...they've both earned my business!
Was this review helpful? Yes No (37/1)
Megabox - Outstanding! By Guest
I was about to do a box build and then I see this unit.  It has everything (almost) that one would want.  The only thing I might add is an in-line watt/ammeter that goes inline with the battery connection - that way you can monitor the sum total of all the power/current flowing in and out of the multiple connections.  Couple it with one of the high-output Bioenno batteries and you've got perfection.
Was this review helpful? Yes No (14/2)
Great box ! But ... By George
... for amateur astronomy use maybe the next version could have some red led lights - but don't make them too bright (for example, the Celestron Power Tanks red lights are MUCH too bright even on the "dim" setting to protect night vision).

Other than that, it's perfect !

I plan on a lot of use for it with astronomy, amateur radio field days, and as a backup for home power outages.
Was this review helpful? Yes No (19/4)
Very well thought out By Guest
I purchased the original power box which is great, but i wanted to have a box with more battery storage inside for longer operation and heavier duty cycle (think field day) so I began to plan out my build on what was probably going to house a 60-80ah Bioenno.  Ibwas getting close to ordering the parts for my build (most from Powerwerx) when suddenly Powerwerx releases the Mega Box.  Your timing was perfect for me.  This is such a well thought out box and the USB type C port is a great touch.  I don't believe I could have saved much money building my own to this level.  Fits the 70ah Bioenno perfectly with room to store the AC charger, inline watt meter, and some various USB cables.  It serves as radio station power fit for field day (with solar panels feeding it 10 amps during the day), and with 600 watt Samlex inverter serves as a backup solar generator for power outages, camping, etc.  Great box, I feel lucky to have one!
Was this review helpful? Yes No (42/2)
Product review was submitted successfully, thanks!
Write a review of this product and share your opinion with others.
-Next Step