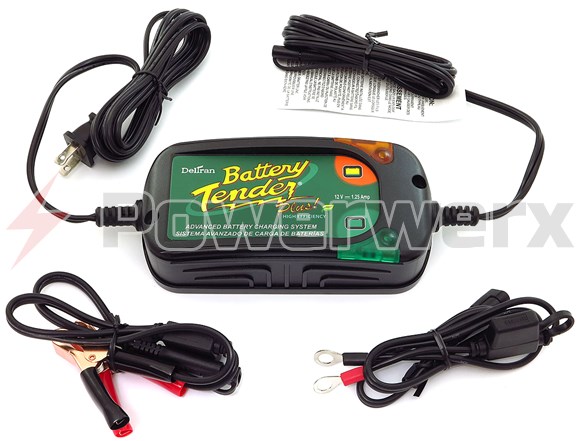 Battery Tender 022-0185G-DL-WH Plus Battery Charger/Maintainer 12V @ 1.25A
Customer Reviews
Several Years Later And Still Going Strong By Stuart Gorsky
UPDATE: March 2009. Im not sure how long ago I wrote my previous review but it must be at least four years.  I am using the same battery/charger combination and all is well. Two or three times a year I test the system by unplugging the Battery Tender and run my ham radio off the battery for five or six days. Each time the battery behaves as if its still new. If my Battery Tender ever gives out, I will purchase a new one!
Was this review helpful? Yes No (7/1)
One of the best purchases you can make! By Cas
This is a sweet little charger. I use it to charge my small portable sealed lead acid batteries, as well as the 12 volt deep cycle batteries I have for emergency use.

One day decided to give a 12V Porter Cable Ni-Cad battery pack a last chance before getting rid of it. The battery did not hold a charge after the Porter Cable charger said it was fully charged. It would run out of juice after turning a couple of screws or halfway through drilling a hole.

I opened the battery, used smaller alligator clips to connect the charger and battery pack then let it sit till the green light came on. The battery works almost as good as new with plenty of gusto in it to do some real work.

7 3,
Cas, KF6CUE
Was this review helpful? Yes No (5/1)
Highly Recomended By Stuart Gorsky
I use my Battery Tender Plus to maintain a large marine/rv battery that is used for a battery backup for my ham radio in an emergency situation. The charger is on 24/7 and one year later my battery works as if it is new and the charger is cool to the touch.

I have also used the charger to "bring back to life" my 12v motorcycle battery and to reenergize my car battery and I highly recomend this product.  I am going to buy another one to give to my best friend....
Was this review helpful? Yes No (10/1)
Product review was submitted successfully, thanks!
Write a review of this product and share your opinion with others.
-Next Step