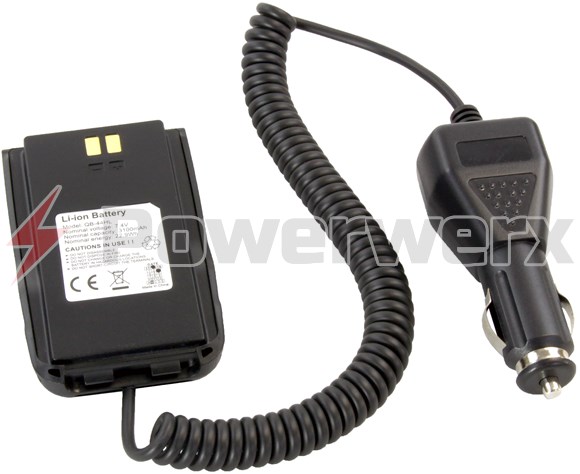 Battery Eliminator for Anytone Handheld Radios
Customer Reviews
Wished this had a small battery too By Guest
It was worked great for me, but I wish for the following two changes:

* That the cord didn't come off the bottom, I wished it came off the side. It is impossible to set the radio in a cup holder when the cord comes out the bottom. The only option is some type of mount.

* A small battery in it too so radio could run maybe 1-2 hrs on battery. Having a small battery would be especially helpful if you're running around but say in the car while others go to a store, etc.. If it did then you could turn off the car, put it in accessory mode, later start the car without the radio dying on you repeatedly.
Was this review helpful? Yes No (0/0)
Also, the LED is way too bright By Guest
Forgot to mention that in my previous review.
Was this review helpful? Yes No (0/0)
Works, but needs improvement By Guest
The biggest failing of this device is the 8VDC regulator in the cigarette plug, rather than the battery case. Hams are used to nominal 12VDC from the "lighter" port. I wanted to convert to power poles, and I'm glad I checked the voltage on the wires. Not glad that I cut the cord, but now at least I made it longer.

A better solution would be something that would work, or could be modified to work, with the Powerwerx CigBuddy - which I have. And also which would work with the Powerpole distribution block I use in my shack. The AT-D868 will be, mainly, used for base station in my case.

Having the cord exit at the bottom is a little problematic when using the Nifty HT stand. I had thoughts of slotting this stand to run the power cord through the stand, but of course the cigarette connector is too large. The power cord prevents using the shelf supplied with the Nifty stand.

A really good solution would be a 5.5 × 2.5 mm coaxial power connector to the battery case - there are variants of these with retention grooves. Perhaps a right-angle would be best. And, as mentioned, put the 8VDC regulator in the case, so the battery eliminator can be hooked into typical ham power supply voltage.

I suspect Powerwerx doesn't spec these - they're rebranded from Anytone, so perhaps no prospect for an improved v.2, but I'd buy it if it were to be produced.
Was this review helpful? Yes No (7/1)
No Voltage By Guest
Tried unit in my truck and wife's car. W/O key in ignition, key in acc and car running. No Joy!
Was this review helpful? Yes No (4/11)
Product review was submitted successfully, thanks!
Write a review of this product and share your opinion with others.
-Next Step