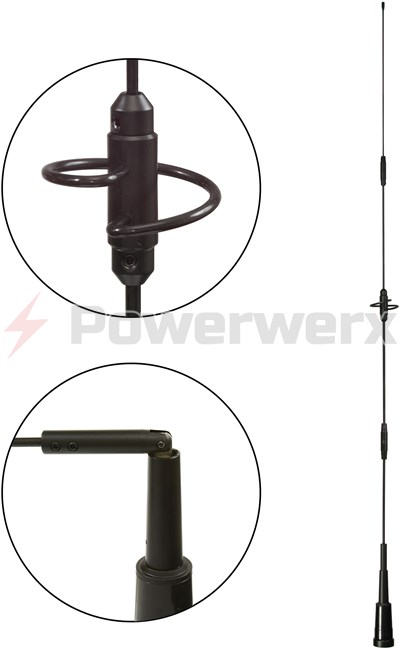 Ultra Wide Coverage VHF/UHF Dual-band Antenna for Public Safety and Amateur Radio
Customer Reviews
Best antenna By Guest
It of the package I connected my radio and got an SWR of 1.00! I love the fact that it folks over as both space saving and safety. I am an over the road driver and sometimes get into a tight spit where it would hit trees or other obstructions and the fold over ability will save theantenna from breaking. I use mine with a 5 1/2 " magnetic base because most all vehicles nowdays are made of fiberglass and of course being a company driver I can't drill any holes even if I could find metal to drill into. I highly recommend this antenna.
Was this review helpful? Yes No (4/3)
Very satisfied SAR user By Una Smith
I often use both public safety *and* amateur VHF and UHF frequencies on the same search and rescue mission.  Before getting this antenna over a year ago I had two antennas, one cut for amateur and one for public safety, that I would change out as needed.  Now I am a very satisfied owner of this antenna.

SWR of this antenna on the frequencies I use most often is not as good as 2+ wire whip antennas cut to length, but this is one antenna.  Real world performance has been more than satisfactory.

The folding base needs illustration.  At first I was sure my antenna didn't have that feature, and so were my SAR teammates until I folded their antennas for them.

I am buying another of these antennas now because my first snapped in half in a carwash (someone forgot to fold it down).
Was this review helpful? Yes No (51/5)
ANTGAIN Antenna Review By Paul Hawthorn
First I would like to respectfully comment on Michael from Omaha’s evaluation of this antenna.

At the end of his statement, Michael was using 5W HT's over 60-80 miles.  The second time they were using a full power 750 over 15 miles in mobile-to-mobile communications.   Obviously mobile-to-mobile may be better or worse than base to mobile and vice/verse on different occasions depending on the mobile unit’s location.  Notwithstanding, using the 2m antenna in VHF/UHF band areas may certainly be better if the test was closer to say the 2M band.  It is my understanding that an antenna made for a specific frequency may out perform a dual or wide band antenna.

Although it is a known fact that it’s all about the antenna, there is a big difference in wattage and distance in the examples given.  Notwithstanding, no mention is made of the environmental conditions during the separate testing times, which of course could also make a difference in transmission performance.  Consequently, I wouldn’t shortchange this antenna.

All the above wrote, Michael may know a lot more about communication theory than me and I respect his evaluation, so when I get a couple extra bucks for R&D I think I will purchase the smaller antenna and test it myself.

A friend and I bought the ANTGAIN antenna/magnetic base and we are very pleased with it.  All of our testing has been mobile to base (with this same type antenna being used on the base end in one case, both transceivers HTs) and the other times between mobile HT units using the ANTGAIN in mobile and a DB 750X Base configuration.  The base antenna utilized with the DB 750X was the Comet GP-9 NC Dual Band base antenna.  We have been able to communicate over distances in excess of 20 miles utilizing UHF under the base to mobile situations.  Of course there is a lot to be said about the Comet antenna being used in our application.

So my evaluation on this antenna based on what my friend and I have found is five stars.

PJ from PA
Was this review helpful? Yes No (39/4)
Ok - But Disapointed with Performance By Michael
We have several configurations for communications both for Amateur and Commercial. I paired this antenna with the DB-750X radio for commercial band UHF and VHF communications. I first noticed when working at the limits of distance the DB-750X and coupled with this antenna was communing up short in range by 20% compared to a vehicle next to me. I chalked it up different configurations in the other vehicle.

Later in a similar exercise again at limits of distance for line of sight this antenna came up short about 20% in range. However, this time it was compared to another DB-750X with the shorter mag mount (ANTMAG)from PowerWerx. We change antennas to a 2-meter antenna even though we were using commercial bands (VHF/UHF)and immediately gained the extra range especially in UHF.

I used a quality meter to check and nothing seemed wrong. I assume there is a general performance hit using the wide band antenna. For the extra cost of the longer antenna with extra gain, it did not perform better then the shorter antenna.

To put the compares in perspective - we were working 60 to 80 miles line of site communicating with a high (altitude) 5 watt handheld in the first exercise. In the second, we were flat across the ground 15 miles mobile to mobile DB-750X in full power.
Was this review helpful? Yes No (56/17)
Product review was submitted successfully, thanks!
Write a review of this product and share your opinion with others.
-Next Step